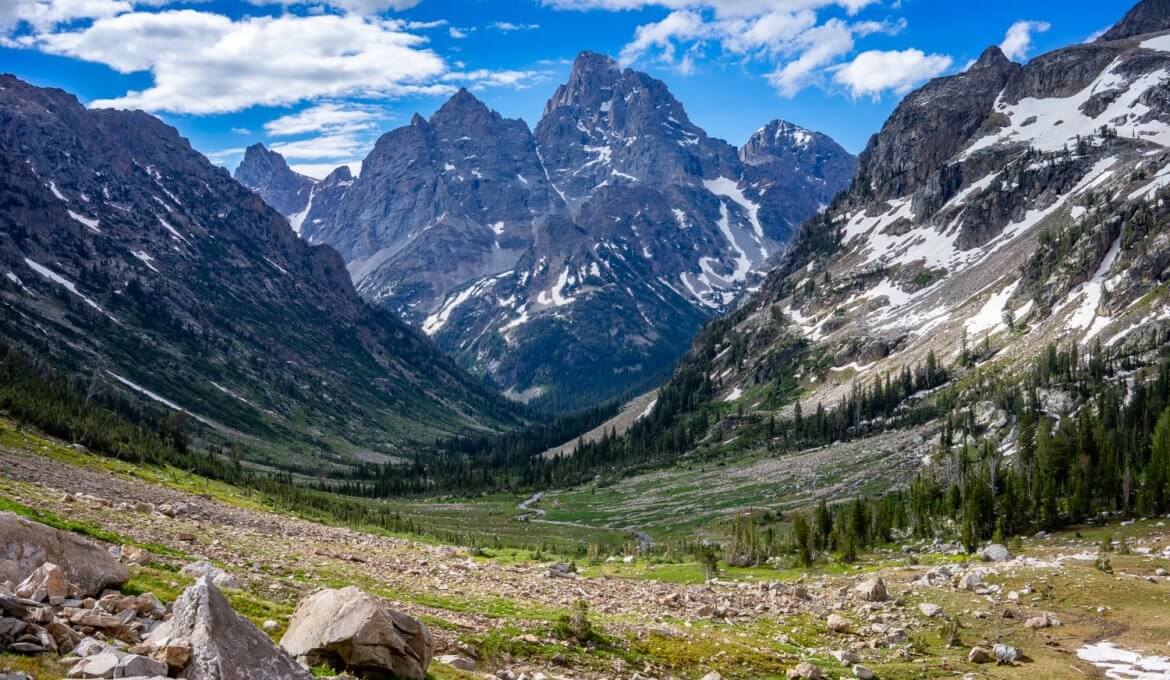 In March 2021, Jason broke the news to Justin, Clay, and I that we weren’t awarded permits for the John Muir Trail.

In our group chat, Clay messaged, “So what’s the summer backpacking trip now that the JMT is out?”

Justin suggested we do the Uinta Highline Trail again, except in four days and in reverse, from Mirror Lake to Leidy Peak. At the time of me writing this, we are three weeks away from hitting the trail for this.

Additionally, I suggested the Teton Crest Trail or Southern Sierra High Route. The group was more interested in the TCT, so I applied for permits in April and got ’em!

Leading up to the trip, I wanted to get an up-to-date snow report from the backcountry rangers but couldn’t get in touch. Finally, a week before we hit the trail, I got ahold of a ranger. He told me we would need ice axes and crampons to climb over the passes, which were still covered in snow.

There was some trepidation about this from the group, but I went ahead and reserved ice axes and crampons from Teton Backcountry Rentals. I did my best to reassure everyone that we would be fine. Thankfully, nobody dropped out.

The evening before our hike, Clay, Joe, Justin, Alex, and I all met up at a disbursed camping spot near Grand Teton National Park.

We watched a beautiful sunset over the Tetons and slept in our vehicles that night.

The next morning, we left Justin’s Subaru and Alex’s Tacoma at String Lake, piled into my F-350, picked up our gear rentals in Jackson, and parked at Phillips Canyon Trailhead, halfway up Teton Pass.

We started hiking at 12:45 p.m. and reached the top of Phillips Pass (8,932 feet) in about three hours. By this time, imposing clouds had moved in and we could see streaks of rain in the distance. By 7:00 p.m., it was raining steadily. Justin and I were well ahead of the group so we stopped to wait for everyone to catch up. Once we were back together, we found a good place to camp in the Middle Fork Zone. We were all soaked!

The next morning, the sun came out and we put out all of our wet gear to let it dry. This would be our easiest day, so we hung out at camp for a while and talked over breakfast and coffee.

On the climb between Fox Creek Pass and the Death Canyon Shelf, we saw a bighorn sheep! We also saw a ton of marmots throughout the entire trek.

Once we were on top of the shelf, it started raining. We took cover under some trees and pitched Clay’s pyramid tarp, the TrailStar by Mountain Laurel Designs.

The storm passed and we covered a few more miles before setting up camp at a picturesque spot on the northern edge of the Death Canyon Shelf camp zone.

This was our hardest day on the Teton Crest Trail! On our way to Hurricane Pass (10,338 feet), we crossed several snow patches, one of which required us to use our ice axes.

We also had our first opportunity to glissade in Alaska Basin, with a few more glissades as we descended the other side of Hurricane Pass. We jokingly pronounced it “Her-ah-kun”, like the town in Southern Utah.

Justin and I also kept a running inside joke that because we grew up in Utah, we had to continually use the Uintas as a frame of reference for everything.

He’d say something like, “This view kinda reminds me a lot of the Uintas.”

We had our minds blown by views of the Grand, Middle, and South Teton towering above the Schoolroom Glacier and its lake-filled terminus, naturally dammed by a moraine.

As we continued down the trail, we were mesmerized by the enormous amounts of meltwater plunging down the mountainside.

It was a long slog down to the Cascade Pass junction and up to our camp below Lake Solitude, but the scenery made our aches and pains easy to ignore.

Unlike the other zones we camped in, the North Fork of Cascade Canyon has designated campsites. On the first two nights, we were able to camp anywhere within the zone, as long as we stayed 200 feet from water sources.

This time, for our last night on the Teton Crest Trail, we were relegated to a tiny campsite.

In order to fit our four shelters, we had to get creative. I wanted to find out if I could set up my Zpacks Duplex on snow and succeeded. I accomplished this by digging 6-inch deep holes with my glove, laying the stakes horizontally, and packing snow on top. It was a solid pitch!

From our camp, we could see where the trail made its way up Paintbrush Divide (10,720 feet). It didn’t look all that bad! As it turned out, it was a butt kicker.

Halfway up the pass, we encountered a 30-yard section of trail covered in  deep snow. A bad fall here would be extremely unfortunate and perhaps catastrophic. That being said, there were well-established footholds from other hikers that had crossed it.

Joe felt uncomfortable with the proposition of sketchy snow crossings. From the beginning, he wasn’t keen on snow travel so he made the decision to turn around and hike out via Cascade Canyon.

Justin insisted on hiking down with him so he wouldn’t be unaccompanied. The “buddy system” is a tried and true safety precaution for hikers of all experience levels.

On our way down the other side of Paintbrush Divide, we encountered another patch of snow that looked even more dangerous than the first.

Clay and I made it across safely and were watching Alex get ready to go when we saw a plume of orange shoot into his airspace. Yikes! Within a split second, we knew he had inadvertently released bear spray all around himself.

I had to laugh, partly because of the absurdity of the situation but also for the emotional release. I saw Clay’s look of concern and immediately knew it was really bad. This was the worst possible spot to be blinded on the Teton Crest Trail.

Alex needed help, so I scooted back across the precarious snow patch. He was grimacing in pain. I grabbed a snowball and rubbed it on his eyelids, then cupped my hands to make a funnel and rinsed his eyes out with water.

After that, I took his pack across the snow patch and set it down. Hopefully, it would be easier without the extra weight.

“Take as much time as you need!” I announced.

We were relieved when Alex opened his eyes and told us he could see again. Soon enough, he made his way across the nerve-racking obstacle, safely to the other side. I was proud of him for pushing through.

From there, the descent was the kind that goes on and on. We lost nearly 4,000 feet that day. Our tired legs and sore feet felt liberated when we made it back to String Lake Trailhead, where Justin was waiting for us under the shade of a tree.

After we picked up Joe from his separate exit point at Jenny Lake, we retrieved our vehicles and rushed to Astoria Hot Springs and Park. We made it 30 minutes before close but they were at capacity. Luckily, a few people left and we got invited in for a soak and a shower. On our way out, the sunset went off!

We finished the night with beer and delicious burgers at The Bird in Jackson, just like we did in 2015 after backpacking in the Wind Rivers.

For the Teton Crest Trail, I customized a plan that provided me with 3000 calories per day.

For breakfast, I had banana bread or peanut butter cup oatmeal with instant coffee. Both oatmeals tasted great but I think the banana bread is my favorite.

Usually, I don’t eat a proper lunch when backpacking. Instead, I opt for small snacks throughout the day as I hike. RightOnTrek had me covered with smoked sausages, cheese, jerky, ProBars, protein cookies, green spicy olives, and fruit bars.

I tried three different dehydrated dinners: gado gado noodles, cheesy mashed potatoes with chicken, and General Tsoy’s mountain rice. They all exceeded my expectations, but the mountain rice was the best dehydrated meal I’ve ever had.

I love how RightOnTrek gives you condiments and all of the meals are packed with protein.

Use code BackOBeyond50 for a 50% discount