During the January 2019 total lunar eclipse, Kim and I were sitting in our backyard, sipping bevvies, and listening to UMOs latest album, IC-01 Hanoi. Our friends were visiting from Utah and we had just finished hiking across the Santa Catalina Mountains.

Admittedly, my memory of that night is a little foggy. I know there were a lot of laughs shared and the lunar eclipse was mesmerizing to watch. I also know that at some point, on impulse, Jason made a campsite reservation in Yellowstone National Park for June 2019.

Last week, we returned home from that outing and I’m still in disbelief over how great it was. It was my first visit to Yellowstone as an adult and it exceeded my expectations which were already high.

We saw a ton of wildlife! 13 bear encounters (including a Grizzly and cubs), a nesting osprey, golden eagles, a fox, a pine marten, American badger cubs, bighorn sheep, pronghorn, bison, and more.

I have to give a huge thanks to Jason for planning this trip, and guiding us to all of his favorite spots. He has been to Yellowstone many times and has earned the nickname “Mayor of Bear Country” among outdoorsy Salt Lake City circles.

From our base at Canyon Campground, we did day trips to different parts of the park on each day.

Me, Kim, and Maia (our 17-month-old), flew from Tucson to Salt Lake City in the afternoon.

My folks did us a huge favor and watched Maia while we were in Yellowstone. They met us at the airport to pick her up and soon after, Jason rolled up in his land rover to pick us up.

We wasted no time and started our drove north with a quick pit stop at In-N-Out Burger in Ogden. A few hours later, we met up with Justin and his wife Kate at Snake River RV Park in Idaho Falls where we camped for the night.

The drive from Idaho Falls to Canyon Campground was gorgeous, especially when the Grand Tetons came into view. Somewhere near Ashton, a traffic slowdown gave me the opportunity to shoot some farmland with covetous views.

Before entering the park, we stopped in West Yellowstone and visited the Grizzly and Wolf Discovery Center on Jason’s suggestion. Here, we got to meet grizzly bears, wolves, and other animals that can no longer survive in the wild.

Afterward, we chowed down at Slippery Otter Pub and chuckled at the tractor-pulling event happening live on their TVs. Queue the “you know you’re in Montana” jokes. The elk burger was delicious, but DO NOT try the Mad Dog 357 sauce. It’s not worth the pain!

Once we arrived at Canyon Campground, we set up camp then set out for an off-trail hike through the forest. Jason led the way, using his Suunto watch to navigate. We ended up doing a 3 mile loop, and got to see the Grand Canyon of the Yellowstone, where we stopped and got a group shot.

We got hit with a few snowflakes on our hike, but when we got back to camp it started to accumulate. After dinner, Kim decided she’d rather sleep in Justin and Kate’s VW Bus than our ultralight tent. The bus sleeps four comfortably, so I did the same.

Our friend Sara drove up separately and also convened with us that night. She runs an outdoor preschool called The Child’s Element. They take children on field trips to the Wasatch Mountains, how cool is that?

With cold temps and snow on the ground, we were slow to leave camp but eventually it happened. We drove over Dunraven Pass and were greeted by dozens of grazing buffalos on the other side.

Before Tower Junction, there was a traffic jam with rangers standing around. Sara caught a glimpse of a couple bear cubs running up the hill, but by the time I turned to look, all I saw was a blur of black fur whooshing away.

At Slough Creek Trailhead, we scrounged down some chips and Costco artichoke dip aka “crack dip”, then began our hike. Leading up to the trip, Jason had sent us videos from YouTuber and bear watcher Stan Mills, and several of his videos were shot here.

About a mile into the hike, we turned a corner and BAM! There was a black bear on the trail in front of us, headed in our direction. At a leisurely pace, he plodded into the brush and continued foraging. It was a great opportunity to watch and photograph him.

During our drive back to camp we spotted another black bear from the road. There was also a beautiful sunset. Naturally, we pulled over and watched.

The next day, we woke up to fresh snow again, but managed to leave camp a bit earlier. On our way to Hellroaring Trail, we got to see three American badger cubs in their den.

From Hellroaring Trailhead, we hiked down to the suspension bridge, crossed, then bore right onto Buffalo Plateau Trail. After a mile, we went off-trail to the left and were lucky enough to see a flock of western tanagers. We also saw a pair of male and female pronghorns.

After a short break, we followed Hellroaring Creek down to its confluence with the Yellowstone River. Then, we made our way onto a few game trails as we skirted the edge of a cliff above the river. We fought off swarms of mosquitoes and got our hearts pumping, without the slightest idea of the moment we were about to have.

Perched high on a chimney above the Yellowstone River, there was an osprey alone in its nest.

From Hellroaring Trailhead, we covered nine miles roundtrip. On our drive back to camp, we saw a grizzly bear, but he was too far away to get a good photo of. We also got to see a mother black bear and her two cubs.

As if the day couldn’t get any better, we also saw a cinnamon bear, which is both a color morph and subspecies of black bear. 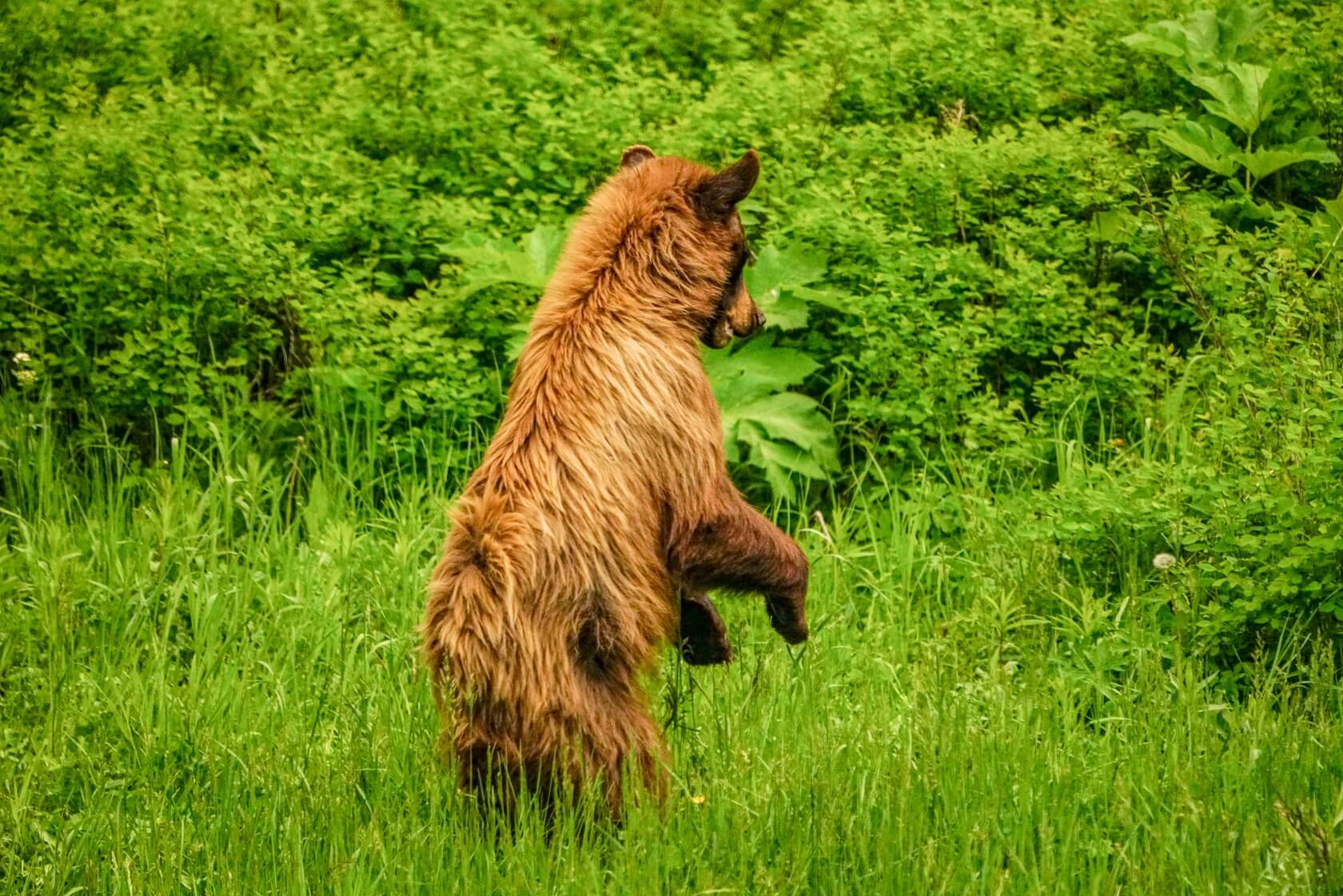 Finally, we woke up to no snow, but it was still cold and the skies were overcast. The benefit of colder weather is that it discourages people from visiting the park. Jason kept commenting that he couldn’t believe how uncrowded it was.

On our way to Grand Prismatic Hot Spring, we saw another herd of bison, this one with many calves.

We parked at Fairy Falls Trailhead and hiked to the Grand Prismatic Overlook, a great place to view the largest hot spring in the U.S. Its rainbow of colors are formed by mineral-rich water in the center, combined with microbes growing around the edge. Afterward, we stopped in at the Yellowstone Art and Photography Center, then the Old Faithful Lodge. We learned the approximate time that Old Faithful was scheduled to erupt next and hiked up to Observation Point to watch the show.

Before returning to camp, we checked out Gibbon Falls and Artists Paintpots.

On our last day, our plan was to head toward Lamar Valley to hopefully see more wildlife. Then, we’d return to Salt Lake City through Jackson Hole, stopping at Jenny Lake to get an iconic view of the Grand Tetons.

Yellowstone delivered an exceptional finale for us. Before leaving, we got to see a mother bear and her two cubs. For better or for worse, we took a wrong turn and didn’t make it to Jenny Lake. Instead, we drove out to Cody, and saw lots of beautiful Wyoming countryside (including the Wind Rivers) on the long drive back to Salt Lake City.

Somewhere on U.S. Highway 20, we had one last wildlife hurrah when we saw a bunch of bighorn sheep scrambling up a cliffside next to the road. I used the following camera gear for all of the photos I took on this trip. I rented the telephoto lens and teleconverter from BorrowLenses.com.